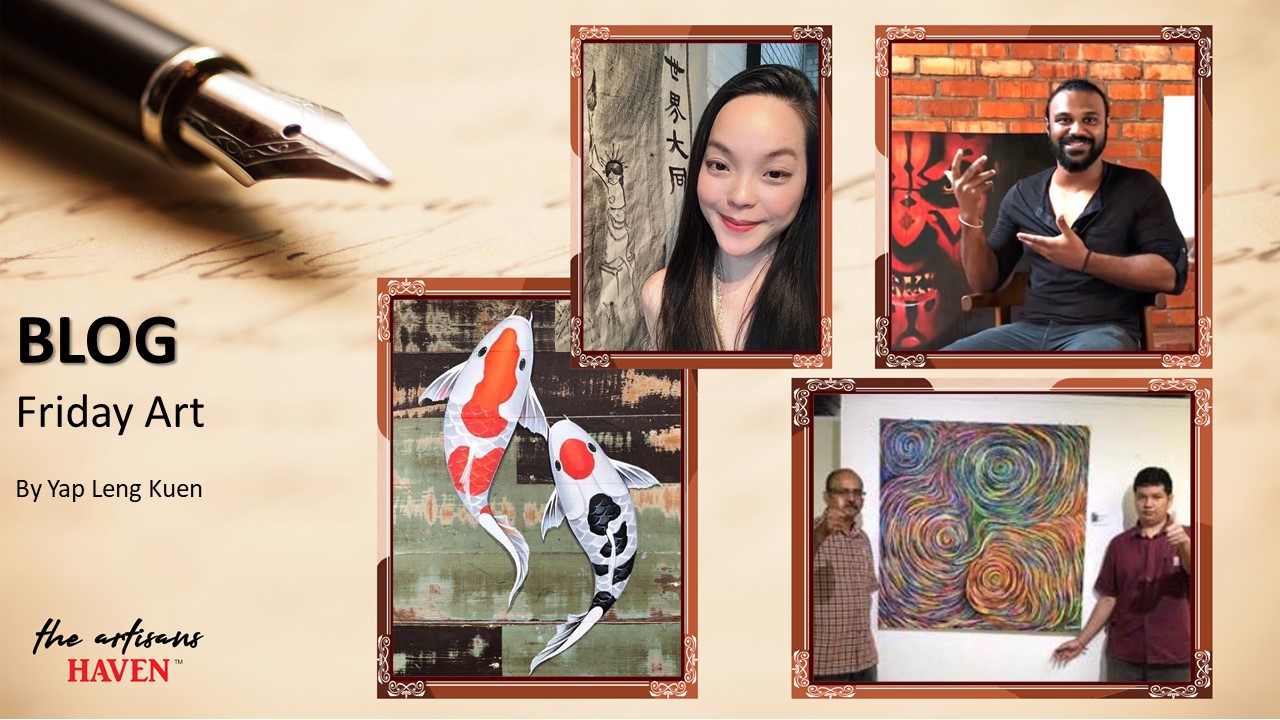 As homes take on new designs, spurred by changes in lifestyles following the pandemic, let us also embrace the Art of Hope to send positive vibes for a vibrant recovery.

Within their beautiful selection, artists on The Artisans Haven, two of whom are award-winning, send out fresh hopes for better days ahead. Her life is a life of hope; her Art of Hope, a powerful message of love, positivity and renewal.

Having survived three major surgeries to remove spinal tumours, Poesy doesn’t dwell on the past but moves forward in her life and artistic journey.

Her iconic Rooftop Cat series (RTC) is a reflection of that hope that even a cat on a rooftop can dream of flying to the moon, which he eventually did, on a magic broomstick.

Her paintings have been described as ‘childlike, whimsical and uplifting;’ her Rooftop Cats and Dragonfly Lilypad series have received international recognition.

Dragon Lilypad was amongst the selected works showcased digitally by London’s Saatchi Gallery.

Having battled not only spinal tumours but also the hurt, anger and depression of the early years, Poesy has emerged stronger with a message driven by compassion, kindness and empathy.

The founder of Helping Angels, Poesy has won humanitarian awards, motivated by her cause for the under-privileged.

Helping Angels is a global network of volunteers committed to a movement of compassion through random kindness projects.

At the age of 17, Poesy was paralysed by spinal tumours but she was lucky to eventually walk again later; she even did ballroom dancing and went back to her TV appearances.

She was getting on with her life, studying for her MBA, when at 28, she found that the second tumour had struck, coiled around her spinal cord.

“And in that process (of the surgery), some of my nerves were damaged but not damaged enough to keep me paralyzed for life,’’ she tells Jeremy Au in his podcast ‘Poesy Liang on Learning to Walk Three Times, Malaysia Childhood and Painting Paris.’

Three years later, she had to go for a ‘clean-up CyberKnife surgery’ to remove the rest of her spinal tumours and was treated by neurosurgeon, Dr John R. Adler, who invented the medical technology.

Throughout her struggles, Poesy continues to inspire us with her artistic works, humanitarian messages and zest for life. 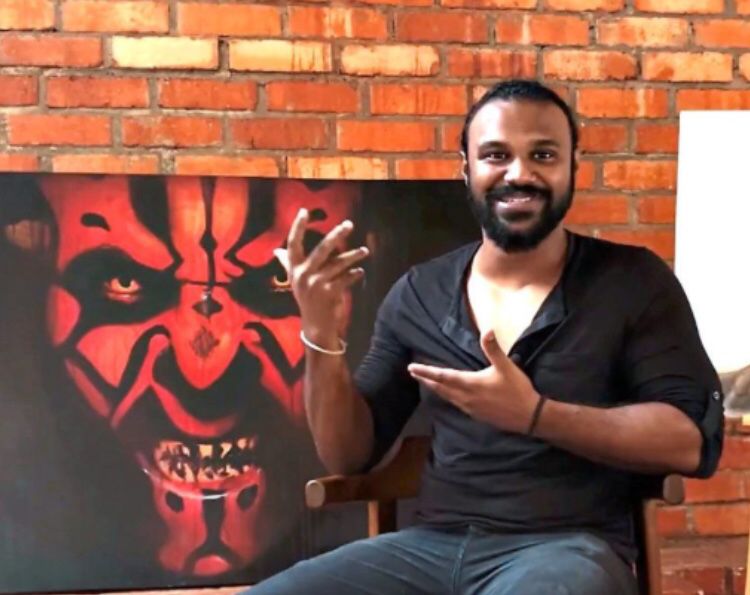 ‘The eyes are the window to your soul’ says the popular quote; it is said that we can understand how a person feels and sometimes thinks, by looking into his or her eyes.

For Sashtri, who is well-known for his realistic drawings of portraits, it is important to focus on the eyes and bring out the expressions from within.

“From my portraits, the person’s eyes look much clearer and more alive,’’ says Sashtri whose clients love the expression he captures in their eyes.

Under his Art of Hope, the portrait of the Lord Shiva in deep meditation inspires us to pray for calm and peace of mind.

Using soft strokes, he can give a totally different look to a person’s portrait.

Sashtri has drawn portraits of inspirational leaders like the late Mahatma Gandhi and recently, the late Dr APJ Abdul Kalam, the 11th president of India (2002-2007).

As an inspirational leader, Dr Abdul Kalam was known for his dedication to his profession, patriotism and love for children; he is called ‘the Missile Man of India’ for his work on the development of ballistic missiles and the launch of vehicle technology.

Sashtri is also attracted to images of the tiger; among his award-winning pieces, he was the grand prize winner of the  Expressions of the Malayan Tiger Art Competition held by Maybank in 2011.

“The portrait of the brave and powerful tiger becomes even more beautiful in my drawing,’’ says Sashtri who drew his first tiger at the age of eight.

A versatile artist, Sashtri also does wall paintings for homes, restaurants and cafes, as well as illustrations and branding on product packages.

Among his awards, he was first runner-up winner in the Tropicana Life Street Tee Competition 2011 and grand prize winner in the Samsung Corby Colour Me challenge 2010. 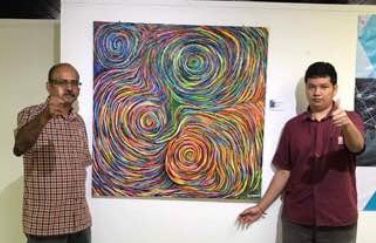 His art, known for its vibrant colours and signature ‘swirl’ effect of long and short brush strokes, brings nature close to our hearts.

Kirtanraw’s Art of Hope is reflected in his paintings on scenery, animals, flowers, cars and abstract art especially in the form of blessings from the rain.

He is born with Aspergers, but is blessed to have a good father, Subramaniam Bandiloo, who works hard to nurture his skill.

Kirtanraw has not only produced artworks but also held art exhibitions.

In 2018, he held his first solo exhibition at the Island Gallery Penang, where he managed to sell four of his paintings and donated 50% of the money to the BOLD Association for Children with Special Needs.

Since young, Kirtanraw had been into 2D and 3D pencil drawings and sketchings; by the time he turned 15, he quit formal education to pursue his art.

He studied for a year in 2008, under art master Koay Shao Peng, principal of the Classical Art Center in Penang.

Every weekend, from his home in Sungei Petani, his father would bring him to Penang for his lessons.

Subramaniam also realized that his son should explore pyrography, the art of decorating wood with burn marks with a heated object, and bought him some equipment from Lazada.

Despite his autism, Kirtanraw is able to paint, do pyrography and wood carving.

“He has been improving with painting continuously and creating artworks,’’ says Subramaniam, a firm believer in ‘practice makes perfect.’

Kirtanraw is a 27-year-old autistic adult.

“To handle an adult with autism is not easy and there’s no cure for it. As a father, I have to be very patient in handling him day to day,’’ says Subramaniam of his only son. (He has two other daughters).

“Kirtanraw has serious repetitive behavior where he will say things again and again. And he doesn’t know he’s autistic,’’ adds Subramaniam.

As his father and art manager, Subramaniam would like to sell his artworks, with the money going into his life savings; Subramaniam is worried about the day when he and his wife are not around anymore to take care of him.

Although they face many challenges, the couple will do what they can to help their son to be successful.

“The public can be proud to own Kirtanraw’s artworks; there is possibly only one Kirtanraw in this world and his artworks are authentic,’’ says Subramaniam who is proud of his son’s achievements. 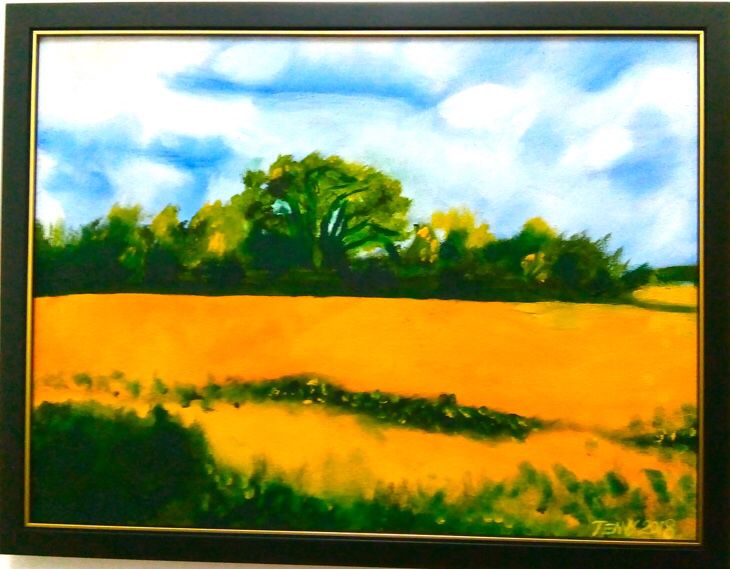 Despite having an inoperable brain tumour, Tenny perseveres to come up with a beautiful series on trees and scenery.

Finding peace in his art, Tenny also has a message of hope for us that ‘’very often, mankind forgets about nature.’’

“There’s too much deforestation and some people don’t notice and value nature anymore, but there’s nice scenery everywhere, from sunrise to sunset, even on rainy days,’’ says Tenny.

“My paintings are soothing and relaxing; they remind people of the places they used to visit before the lockdown.

“Those of us who are fully vaccinated may be able to venture out again, but many of us still worry, take precautions and may stay indoors more often,’’ says Tenny.

He paints when he gets some time off from his full time job in customer service, at a large online shopping platform.

Or when he feels well and fine, as his brain tumour causes him complications such as headaches and a sense of imbalance.

In 2015, Tenny had suffered not only a stroke but also found out that he had an inoperable brain tumour.

His active lifestyle especially in sports and his love for bicycling could not be pursued anymore.

Not one to sit down and do nothing, Tenny had worked at several places since then, and is happy to have found his present job in which he has prior experience.

Tenny’s Art of Hope is not just about his paintings on scenery; it is an inspiration to us that despite his suffering, Tenny still appreciates and captures the beauty of nature around him. 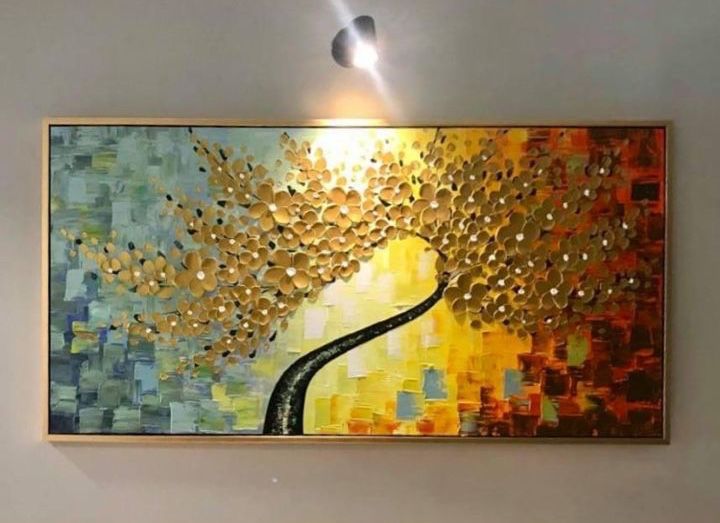 Many paintings at VAC denote Hope that things will change for the better.

The Golden Avenue painting shows a path of gold into the future, which is lined with trees in yellow orange, representing the colour of gold.

Paintings of money trees hold a special meaning for homes and offices.

“The trees will grow taller and taller, as they ‘seek for success’ at every layer; flowers in gold bring luck, joy and hope especially in these difficult times, to our families, careers and businesses,’’ says Irene Siew of VAC.

Paintings of flowers growing beautifully in the sun, bring cheer to us everyday and help us feel much better. 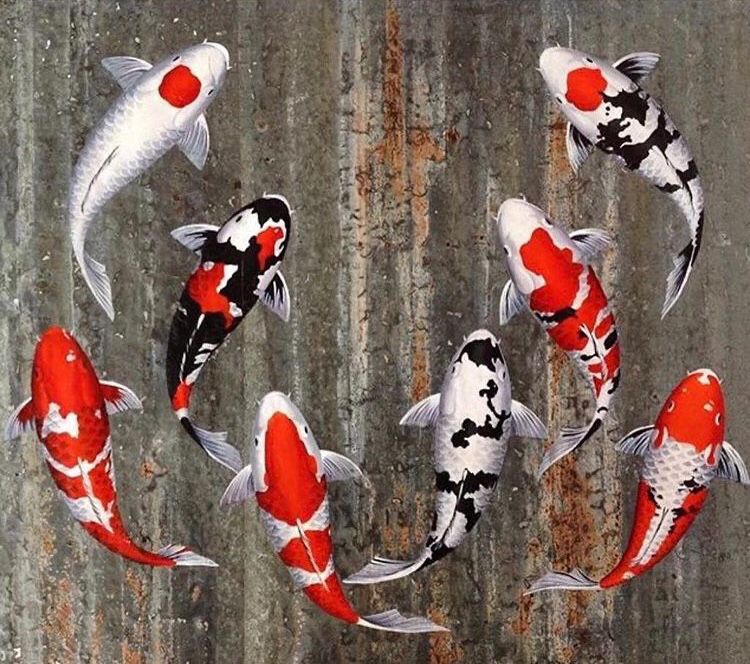 Following several rounds of lockdowns, a variety of koi fish paintings at BinaSinar will brighten homes with fresh hopes of health, wealth and prosperity.

In striking colours of red, white and black, they are a happy picture in your home or office, as they exude a feel good factor with fengshui elements.

Reflecting the rich flora in Malaysia, are paintings of hibiscus, frangipanis, bougainvilleas, orchids, ixora, rafflesia and other flowers that grow well in our tropical climate.

They are good to complement the green environment in homes, offices, cafes or restaurants, along with other decorations that remind us of nature.

Your support for the original works of artists on The Artisans Haven is much valued, as they continue to inspire us with their messages of hope, joy and kindness.